Rebuilding Notre Dame: What To Know About Charity Phone Scams 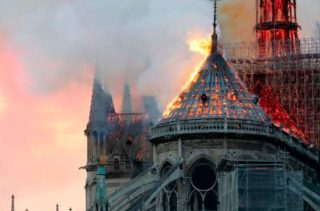 The world was shocked when fire broke out at the Notre-Dame de Paris, one of the most iconic cathedrals in Paris. People mourned as the centuries-old structure burned and as the spire fell while 400 firefighters fought the fire. Almost immediately, charities – real and fake– began asking for donations to rebuild the French national treasure.

A Cry for Help

Almost 13 million people visit Notre Dame each year. Builders erected the church in Paris 850 years ago. The church houses famous works of art and serves as a museum. It is no surprise that people are willing to dig into their wallets to rebuild the cathedral. Scammers scrambled to create a plan to take advantage of the fire and make some easy money. Thieves set up websites acting as charities and crowdfunding sources to trick the public. Thieves assume people don’t know that the cathedral is owned by the French government. Private citizens, businesses, and the government have already amassed billions of dollars in a fund to reconstruct the church.

Con artists play on the emotions of people in the aftermath of disaster. For every natural disaster, accident or act of terrorism, scammers are waiting to collect from the public. They ask for money through websites, social media, email and phone calls. The pleas for money are convincing and never ending. People should take steps to check out any organization before giving any money, even if it’s a good cause.

Donors can research charities by logging onto The Federal Trade Commission’s list of organizations that can verify if a charity is real. You can also read news on charities. The article Before Giving to a Charity shows how to donate wisely through social media.

How to Avoid Scammers

Telemarketers can be pushy when they ask for money. Companies and scammers use robocalls to make it harder to avoid the demands. If you receive a call from someone asking for money to help rebuild Notre Dame, ask a lot of questions. What is the full name and address of the organization? How will the money be spent? Does the organization use the money for admin costs or marketing expenses? If you are unsure of the person calling, hang up and research the charity online. If the calls continue, use an app to block unwanted numbers from your phone.

How to Report Fraud

If you think you’ve been scammed by a fake charity, report it to the FTC’s Complaint Assistant. Give as much information as possible. Second, if you have used a bank account or credit card to make the donation, contact the company right away to block the payment. Lastly, you should also report the event to your state’s Attorney General.